The rib cage, breathing and your tight left pec

One of the things I have been spending the most time and resources on education wise for the last 5-6 years is human asymmetry and why it matters. The Postural Restoration Institute out of Lincoln Nebraska has been my gateway into this and THE resource on this topic. What I’ve come to realize is that human functional anatomy is nothing like what’s taught in school. Like…nothing at all.. I don’t care if it’s university, medical school, massage school or whatever -school you come with. If you are taught about ‘a’ hip or ‘a’ shoulder or any test or exercise relating to this you have been misled. I can say this with a lot of skin in the game, since I too had to change all of my thinking and rationale for the past years while studying PRI. There is no such thing as ‘a’. There is a right and a left side to everything and they need to be studied, tested and treated differently. This blog will focus mainly on the rib cages influence on pectoral tightness and asymmetry. Hopefully this will be the first of many blogs on the subject, so I can cover more cases and areas of the body.

One could say, that it all starts at the ribcage and diaphragms. The thorax is highly asymmetrical in part due to the asymmetry of the organs inside the thorax. There are a few main components of inborn asymmetry that I will cover today, which then produces a specific patterned outcome that is thus not inborn asymmetry but more a consequence of the way you are build and the way you end up using your structure. The points of asymmetry are:

In order to not make this too long, we will focus mostly on the influence of the diaphragm. The right hemi-diaphragm is responsible for getting air into the left side of chest. Since the right diaphragm is larger, and we tend to favor our right leg, partly because we are heavier on the right side due to the liver, and the heart helps to keep the left rib cage open, we tend to experience a degree of hyperinflation on the left side compared to the right side. The triangularis sterni is actually biased to counteract this, by attaching to more ribs on the left side, but it is not enough to counteract the abovementioned.

So with that extremely short explanation I will show you some pictures of a real-life client being in this exact pattern, and show you how it matches the symptoms of the client aswell as our current strategy for resolution. 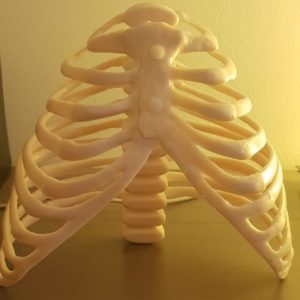 A symmetrical looking ribcage – how we are taught it looks 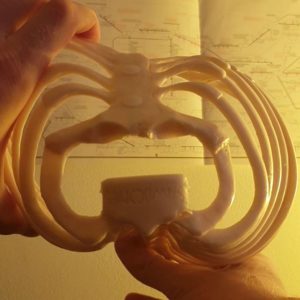 An asymmetrical ribcage with the left side hyperinflated in the front and a right posterior rib hump. How it looks on most people in real life.

So above I have two pictures showing the differences between a symmetrical looking ribcage (left) and an asymmetrical one patterned like a “normal” human ribcage (right). Below is a real-life client in the pattern of the picture on the right above. 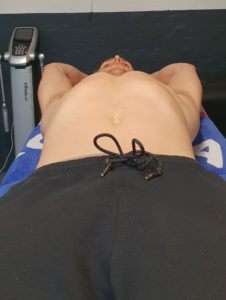 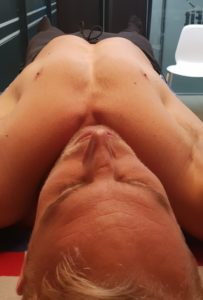 The asymmetry of the ribcage visible from above and below

The client has complained of a tight left pec and had problems with minor pec-tears during bench pressing. Stretching has helped alleviate symptoms, but never provided a complete resolution and client usually ends up reinjuring himself.
If you look at any of the pictures you will see the asymmetry of the clients ribcage. The left ribs are more externally rotated in the front than the right, but both sides are quite “flared out”. Since both sides are externally rotated, this indicates a degree of hyperinflation on both sides, but the left side is more hyperinflated than the right. To further show you the asymmetry I’ve attached pictures below from the clients left and right infrasternal angle. As you can see, the left side is approximately 10-20 degrees larger than the right.

So how is this related to the left pectoral muscle being tight? In a few ways.

So basically the left pec is actually not “short and tight”, it is “long and stretched”. It feels tight, in the same way that a rubberband feels tight if you stretch it too much. But it’s not tight, it’s long. Stretching thus is not the solution and more than likely will only make it worse and possibly increase instability in the left shoulder. The solution is to get the ribcage more neutral, by deflating the left side. Since this client has some degree of hyperinflation of both sides, both sides probably need deflating, but the left still more so.

The relationship to breathing and the Zone of Apposition

So – the tight left pec is actually an airflow problem, and not a stretching problem. Here’s a few more words about how this relates to breathing in general, and why the solution will involve breathing exercises (airflow management). Inside the thorax is your diaphragm, which is supposed to work like a piston, to draw air into your lungs. The shape of the diaphragm is directly correlated to the position and shape of the ribcage, so based on the pictures above the left and right diaphragm on the client cannot be equal. This is on top of the already inborn differences. For the diaphragm to work “properly”, it needs a domed shape. Otherwise the central tendon cannot drop, and the diaphragm cannot piston properly. The domed shape requires the anterior ribs to be internally rotated, covering the diaphragm. This is called the zone of apposition (ZoA). As you will see on the pictures, the client has lost his zone of apposition on both sides, but moreso the left side than the right. In order to fix the left pec, we need to re-establish the left ZoA to keep the anterior ribs down. This is done in part by the serratus keeping the ribs back and the obliques keeping the ribs down closer to the pelvis. This will also impact left hip stability and pelvis position, but that is for another blog.

So – now for the treatment rationale. These are exercises from the PRI shown here by my skilled colleague Neal Hallinan, whom I was lucky to meet at my latest PRI course in NYC. So far we have given the client two exercises – one to establish the left ZoA and one to help orient the sternum to the left. I will show you here the first exercise, which I believe can be beneficial for most people, and is not too hard to perform. Most PRI exercises definately require hands-on coaching in my humble, honest opinion, and thus I will not demonstrate many techniques here that I don’t believe people will perform properly anyways.

The first exercise is an all-fours variation to regain the left ZOA. Make sure to keep the back rounded, pelvis elevated on the left in the frontal plane and pelvis posteriorly tilted in the sagittal plane. Inhale through your nose and exhale through your mouth, pausing 3 seconds after every exhalation to bias the exhalation muscles. If you are not feeling the left abdominals and serratus in this exercise, you are more than likely not doing it correctly.

After achieving a left ZoA further treatment will require upright stance integration of this new breathing pattern and learning to rotate the trunk to the right by getting more airflow into the right chamber.

Feel free to reach out for consultations