This past weekend I attended the first European McGill conference in The Netherlands. It was truly a great setup by the host https://www.designed2move.nl/, whom had arranged it all in a nice hotel with lots of sporting facilities and nice nature around it. I first saw Stuart McGill present at the 2016 SWIS Conference in Canada, and I would say it was one of the top presentations I observed that year. As such when I saw McGill was coming over the pond for 4 days it was really a no-brainer to sign up. Many of my clients have back pain (and I want my programming to keep the healthy ones healthy too), I myself as a teenager suffered a back injury leaving me unable to do any sports for about one year and besides that McGill has a lot of links to high levels of athlete performance in his work, which is just as relevant to me and my clients. Furthermore – who wouldn’t want to learn from a guy with 30 years of clinical experience and countless research articles published? Anyways, enough prelude. There were many takeaways from the course, and below are some of the top ones that come to mind when reflecting back. 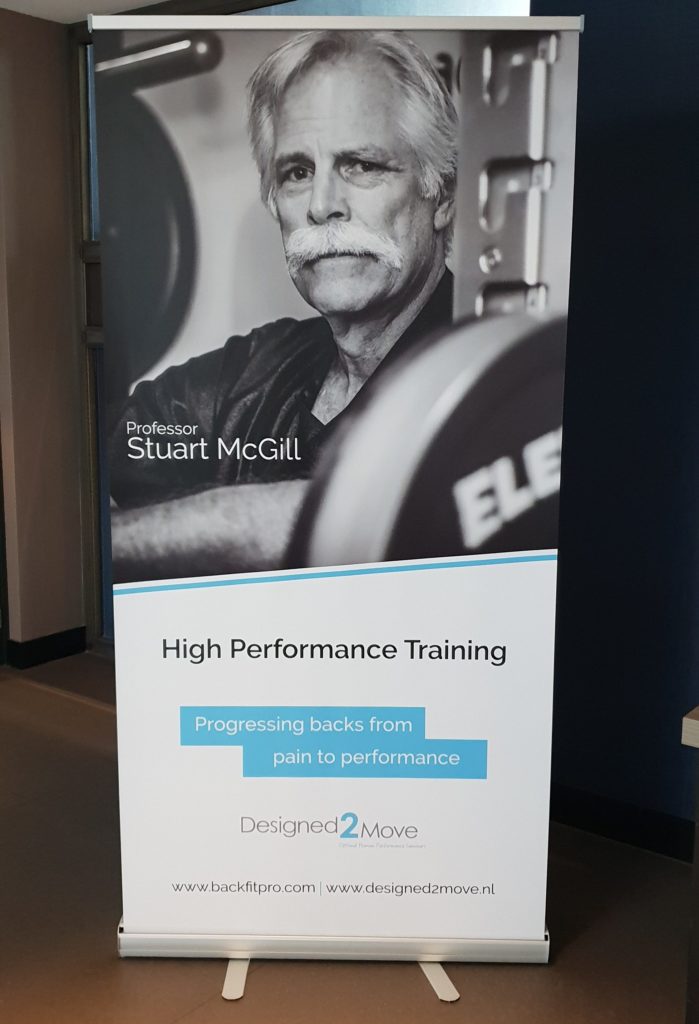 This was a key point throughout the entire conference. If the core is stable, the ball & socket joints and appendages can move freely, which allows for peak athletic performance.

One of the big trends in physical therapy throughout the 2000s has been trying to isolate the TVA muscle to decrease back pain. McGill disagrees highly with this practice, since drawing the abdomen ‘in’ in order to try and activate the TVA is not how you brace and stiffen the spine. Furthermore the TVA is neurologically linked to the internal oblique, so a side bridge with a brace would target both those muscles much more effectively, while increase spine stiffness.

In many sports explosiveness and all that centers around fast movement is much more important than maximal strength. Even more important than being able to fire a muscle quickly, is being able to relax quickly. Top athletes relax 6x quicker than ‘normal’ people, but only fire muscles 2x quicker. An example of this ‘bang-bang’ neurology is the Olympic lifts. You hit the bar in the second pull (first bang), then relax to dip under the bar and then tense up in the catch (second bang). Another example is a punch or a kick. The first bang is the hips sending the appendage away through a stiff core, followed by a short relaxation and then a second bang which is stiffening upon impact.

One marker of back pain in athletes is good core strength, with poor core endurance. You need to have both in order to sustain a lot of repetitions and long training sessions. In order words if you are the guy who can squat double your bodyweight, but can’t hold a side bridge for 30s you are headed for trouble.

If you want to excel at a high level of sport, you need the right genetics. For example many Eastern Europeans have hip sockets build to squat deep easily – hence the term “Polish Hip”. One good example of this is a hip surgeon who brought up the fact that 80% of his Caucasian clients regularly did yoga, while at the same time he had never had a single Indian patient. Where does yoga come from? India. Joke is on you, all you white guys doing yoga. A ‘Celtic’ hip is much more suited for the Highland Games.

Your spine will adapt to what you do regularly. A very mobile spine will have adaptations for mobility, looser collagen fibers and less dense bone. On the other hand a powerlifters spine will grow thicker through repeated microfractures. Trying to have both at a high level is a recipe for injury, since it is not just neural control keeping the spine either stable or mobile, but also permanent adaptations over years of training. If you want to do something at a world class level you need to pay the price of that specialization.

This is a great point for those working on heavy deadlifts. Funny enough most top strength coaches I’ve learned from have always endorsed only doing heavy deadlifts once every 7-14 days. When you do heavy deadlifts microfractures happen in the spine, and these microfractures heal a lot slower than muscle tissue. Thus deadlifting once every 5 days or less frequently might be the best way to get stronger while keeping the spine safe. Obviously total volume is still the big player here, but it is a good reminder for those stressing their spines a lot.

Okay there might be – but the guy who picks a car seat up from the floor and herniates a disc, that is not an acute injury. That was the straw which broke the camels back, after years of repeated small traumas. In other words you don’t see the damage you’ve been doing, often until it is too late.

This is an interesting relevant point to many workers and athletes. Spending time in full flexion such as slouching may result in a temporary laxity of soft tissues, decreasing spine stability. In other words the powerlifter who sits down 10 minutes between sets or the office worker who sits at the computer for an hour and then has to lift boxes for 10 minutes may want to consider their sitting posture, or at the least get up a few minutes before lifting. McGill also consulted with a sports team to teach them not to sit and slouch 15 minutes every half-time or when the players were on the bench, however his suggestion of barstools was banned since it was not audience-friendly. Money before athlete health is the name of the game in many sports, I guess.

Stuart McGill is known by some as the ‘oldschool biomechanist’ guy, receiving a lot of criticism for not following along the new ‘biopsychosocial’ era. I would beg to differ. Actually McGill is very much a proponent of trying to desensitize to pain, but with 30 years of clinical experience in biomechanics and many many many results in rehabilitating people from debilitating pain he still believes biomechanics is the underlying driver behind a lot of pain. The new pain science era is definitely important, but biomechanics should not be ignored. McGill showed many examples of MRI findings which had been overlooked, and a few examples of fluoroscopy showing dysfunction that was otherwise overlooked on static scans. Further McGill had also seen people who had been outright suicidal after being told by their pain scientist that “pain was all in their head” and several cases of people who kept moving through pain only to realize a few years later that they had now worsened previous structural damage. Anyways pain & biomechanics is a hot topic & I hope both camps can get together more in the future.

If the femur does not move properly in the acetabulum, stress from the hip joint can migrate into the lower back. One reason for this can be a relative glute-deficiency and hamstring dominance during hip extension. During hip extension the hamstrings pull the femur forward in the socket, while the glutes pull the femur back. As such the proper balance and glute activity is important for preventing hip impingement and decreasing stress to the lower back. While I’m not into the whole glute-specialization-training-era, it is definitely important to assess and keep this in mind.

One thing that was repeatedly brought up, was the above. Does your client really need to deep squat, or does he/she just want to feel great and be pain free? Not everyone needs to squat and deadlift, and getting stronger will not always improve sports performance. Moving better however, would help almost everyone.

McGill said that 95% of the patients he sees, ends up not needing surgery. One of the points that he made was, that sometimes the simplest and most effective cure is rest, and that one of the reasons that surgery sometimes works is, that it is forced rest. So… if you are the person who has ‘tried it all’, but nothing has worked, make sure you also have simply tried to rest, and from there build up slowly.

When McGill started out seeing patients, it was with 2-hour consultations. Everyone thought he was mad, but since then he realized that often 3-hours or more is needed to make a proper assessment. I highly agree with this. The best rehab comes from working very closely with patients, not from performing 2 standardized tests and sending them home with 1 exercise to do.

In this evidence-based era, often the clinical skill of a clinician is undermined, since everyone wants standardized, evidence-based, cookie-cutter approaches. It was truly magnificent to see McGill on one hand present a lot of his research in a clear ‘numbers-don’t-lie’ fashion, and on the other hand see him as a clinician saying that there are no two patients who are the same, and that in the end as a clinican you are ‘playing jazz’, not performing statistics.

Anyways to sum it all up. It was definately a great learning experience, with a lot of focus on simple basics and hard facts. I’m not a pain scientist or a back expert, I am a trainer & a student. I do however think, that no matter which title of the above you slap on yourself, you can learn something from McGill, and I also think that many people are too quick to criticize him and his work these days on social media or in their clinic.